There is a paradox in New York City. While the city is home to world-class research institutions in biological research, places like Columbia, Mount Sinai or Rockefeller, the presence of a vibrant bioscience and technology industry is comparatively lacking. Compared with regional hubs like San Diego, Boston/Cambridge or the San Francisco Bay area, biotech employment figures of the past decade are meager in NY.  How can an area like New York, with unparalleled access to cutting-edge biological research and a surplus of well-educated scientists, be relegated to such a low profile in the biotech world?  Much of the answer is defined by two main obstacles: lack of space and lack of money. Fortunately, the end of 2013 saw important announcements and developments that have the potential to change the situation. 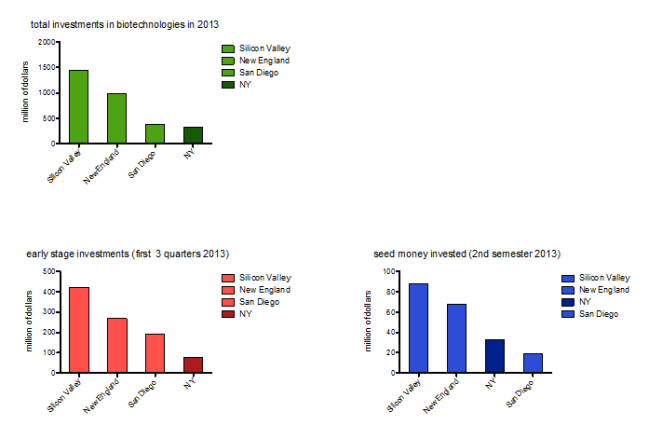 Investment in biotechnologies in 2013
Data obtained from the Money Tree Report, a joint project by PricewaterhouseCoopers and the National Venture Capital Association

While the tech culture is full of legends of companies starting up in a basement or garage with minimal resources, biotechs are inherently different. Compared to a computer programming or hardware start-up, significant space is needed for benches, hoods, reagents, equipment, and animal facilities (in addition to compliance with a set of demanding federal and state biosafety and labor rules) before any work can even begin.  As everyone living in New York knows, space is a very rare commodity. A previous EJBM piece reported on some of the city’s attempts to deal with this problem, through the funding and construction of large-scale biotech incubators/education centers. The Alexandria Center for Life Science thrives on the East River, and Roosevelt Island will be the home of Cornell Tech.  However, the article points out, they are presented as flagships of the New York biotech scene and are beyond the reach of very early stage start-ups. These recent spin-offs from university labs usually need to keep ties with their original academic institutions and seek more affordable workspace.

With Columbia on the West and Mount Sinai on the East, Harlem is poised as a logical convergence point of the current biotech incubator momentum. A group of 5 scientists from Mount Sinai recently launched a biotech incubator project in East Harlem, not far from their home institution. While money still needs to be raised, this project has received good media coverage and their office and wet lab space are due to open soon.  On the West side, Harlem Biospace opened in Fall 2013 on W 127th street. This incubator now hosts more than 20 companies. Activities focus on diverse aspects of biotech, ranging from patient-specific bone production (Epibone), microdevices for diagnostics (Junco Labs) or isolation and supply of primary cells for research laboratories (Primary Cell LLC). Harlem Biospace targets very early stage start-ups, prior to Series A funding, and with very few team members (sometimes a single person). Importantly, the incubator has strong ties with the NY academic world. The incubator is within walking distance of Columbia University, its founder is a Columbia faculty member, and applying start-ups must originate from a NY-based medical institution.

The increasing development and access to a biotech infrastructure will hopefully present New York City as an attractive locale for further growth. However, New York City has to find its own style of biotech business. Local research institutions and incubators of New York will always be somewhat physically separated from each other. Given the existing urban density here, we cannot expect the open spaces needed for a new Silicon Valley or a new Kendall Square to grow. Instead of thinking of a New York biotech hub or campus, we must view it as a decentralized network, and that presents an important challenge in the years ahead.

A qualified labor force and supportive infrastructure are not the only types of capital needed to foster this kind of industry. Biotechnology is an expensive activity and profits might be many years down the road. Even initial proofs of concept may require substantial time, money and patience to develop “off the drawing board”. External financial support is thus crucial to help researchers weather the journey from academia to start-ups. Here again, we see the relative scarcity of investments in starting biotech companies in NY compared with Boston, San Francisco or San Diego. As shown in figure 1, much less money has been invested in biotechnologies in New York last year, and this is particularly applicable in terms of seed money and early stage investments.  Is this a self-perpetuating cycle, where investors see the biotech-sparse New York as a poor place to invest and the money remains aloof, or is there a way to overcome the inertia and encourage a fresh look at New York as a yet-untapped resource?

To tackle this issue, in December 2013 the Bloomberg administration announced the launch of a $100M fund to assist the creation and growth of biotech start-ups in New York. This significant amount of money will be available to seed Series A investments for biotech in the course of 2014, hopefully providing some momentum for biotech business and encouraging private investors to get on board.  Importantly, the fund is a joint initiative. The city of New York provides $10M whereas two top pharma companies (Celgene and Eli Lilly and Company) as well as GE Ventures together contribute $40M. The fund is currently reviewing VC investor proposals to provide the remaining $50M. The hope is that the participation of institutional and pharmaceutical partners will bring confidence and encourage VC partners to jump in. More than just facilitating the creation of start-ups, this joint fund will hopefully build constructive ties between the different forces in biotech. Indeed, beyond potential return on investments, big pharma participating in that fund will develop closer ties to academia and young start-ups, giving them valuable insight into the latest conceptual and technical innovations in the making. Finally, one can expect the impact of the fund to create larger scale awareness of developments that will end up being beneficial for the whole NY biotech scene.

Geographical and historical reasons have been somewhat limiting of the biotech industry in New York City. This situation has spurred the adoption of several initiatives have been taken up to revert the situation. The end of 2013 and 2014 is seeing significant progress with the proliferation of affordable incubators and the creation of a large joint fund for biotech start-ups. But NY probably cannot try to blindly imitate other biotech hot spots. Acknowledging the inherently decentralized structure of the academic/biotech sector of the city, New York will have to find its own way, perhaps favoring a more fluid, cloud-like organization of its biotech landscape.

Pablo is a French postdoctoral fellow at Albert Einstein College of Medicine, hiking and cello lover, food enthusiast and cocktail apprentice. He did his undergrad at the Ecole Normale Superieure in Lyon, France and obtained his PhD at the Paris-Descartes University in Paris. His current work deals with the general cell biology of macrophages, mostly cytoskeleton dynamics and cell biomechanics. Pablo is seeking to progressively move his field of research toward the interface between cell biology, biophysics and bioengineering. While dearly missing the sweet life of Paris and the pleasure of French cuisine (cheese, I love you!), Pablo is eager to further experience the life in the US and plans to stay in this country for a while longer.

1 Response to Updates from the Biotech Scene in New York City: New facilities and initiatives encourage and support start-ups